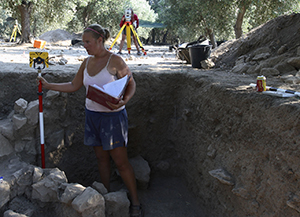 Together with lab manager Holly Parton, our undergraduates undertook two ambitious projects: to prepare the Mitrou excavation records for publication and to start the reorganization of our storeroom. Being students of Latin and Greek (and English), our majors were ideally prepared for these tasks. For six weeks, they and volunteer Lynn Rogers, from Elizabethton, Tennessee, carefully checked and corrected notebooks and database, wrestling with sometimes-cryptic handwriting. Half of our excavation records are now corrected so they can be used by Mitrou researchers. They are ready to be published online in the future. Our students also carried out a full inventory of archaeological finds and their locations in the storeroom. They made good progress repacking important objects with archival storage equipment. Sydney provided indispensable help with the photographing of hundreds of objects.

This year, we welcomed two new UT graduate students, Vernon Stafford and Meagan Dennison. Vernon (PhD student in chemistry) is writing a dissertation on the foods, drinks, and other organic substances used by Bronze Age and Early Iron Age people at Mitrou and six other sites in central Greece. Supported by a summer graduate research assistantship from the UT Office of Research and Engagement, Vernon took 109 samples from ceramic vases and soil units for organic residue analysis. He is now analyzing the ancient samples from Mitrou that Bryson White took last year, as well as the modern foods and drinks we brought back from Greece to serve as reference samples. For his research, Vernon has access to state-of-the-art facilities at UT, including the Biological and Small Molecule Mass Spectrometry Core (SMMSC) facility housed in the Department of Chemistry.

Our new zooarchaeologist Meagan Dennison (PhD student in anthropology), with the assistance of our undergraduates, has made an excellent start documenting and studying our large collection of animal bones from Mitrou (some 125 crates). She has analyzed more than half of Mitrou's significant contexts, identifying and documenting some 4,000 bones, including a possible bear or lion bone. Having been trained with New World animal bones, Meagan needed a reference collection of modern Old World bones. She was able to borrow reference samples from the Wiener lab at the American School of Classical Studies at Athens, but she was eager to build up her own collection as well. To this end, she led our students on several safari trips into the local mountains, joyously returning with trophies such as a large cow skull and many bones of goats, sheep, and other animals. Group field trips to archaeological sites and museums were punctuated by Meagan stopping her car abruptly as her sharp eye spotted road kill for her collection. Invariably these modern skeletal remains needed thorough cleaning, which was a rather odorous task not beloved by everyone in the team. Unfazed, Meagan and her student helpers devised strategies to get the work done as unobtrusively as possible. Cooking pots with bones frothing quietly in cleaning chemicals could be spotted in unexpected places around our dig house, ever moving to escape the notice of team members with particularly sensitive noses. By the end of the summer, Meagan was the owner of a pretty decent collection of sparkly clean bones.

Architect Giuliana Bianco and I continued our detailed study of Mitrou's stratigraphic sequence. We investigated what we believed to be a predecessor of Late Bronze I elite Building D, and, to our great surprise, discovered that there was in fact a sequence of two buildings below Building D with a series of six floors, all dating to the beginning of the Late Bronze Age. This study has made it clear that the development of elite architecture and the reorganization of the settlement at Mitrou was a much more gradual process than previously thought.

On weekends, we took field trips to major archaeological sites and museums in Greece, such as Delphi, Athens, and the Argolid. At Mycenae, Professor Nick Blackwell (Indiana University) gave us a tour of the Lion Gate at Mycenae, on which he has published a groundbreaking new study. That same weekend we attended a performance of Sophocles' tragedy Electra in the ancient Greek theater at Epidauros. A special opportunity arose when I saw a notice by the Greek navy asking for volunteers to row the Olympias, a scientific replica of an ancient Athenian trireme – a large warship with three levels of oars. I signed us up and on a bright Sunday morning, we rowed the trireme in the area of Piraeus harbor together with some 120 Greeks.

Lynn Rogers sewed ancient Greek outfits for the occasion. I have taught our students about ancient triremes for years, but there simply is no substitute for actually sitting inside such ship and hearing 130 oars hitting the water at (about) the same time, propelling the ship forward. I do not think our students will ever forget this feeling of shared purpose. We certainly gained a keen appreciation for the amount of training that must have gone into maneuvering such ship during ramming and other naval tactics in which Athenians excelled. Truly, the trireme was a symbol of Athenian democracy, but also the engine that made the Athenian maritime empire possible.

As every year, we would like to thank the many people who make the Mitrou project possible:

Thanks to support from the Athena Travel Fund of the UT classics department, I was able to spend my summer in Greece working on the Mitrou Archaeological Project. I developed crucial skills in archiving and preservation, which I was fortunate enough to be able to present at the AIA East Tennessee Society Student Fieldwork Night this fall. Being able to work with material culture hands-on was an unforgettable experience and provided me with the necessary world experience for my future graduate studies in ancient history. My favorite moment of the trip was visiting the site of the Battle of Chaeronea (338 BC) where Professor Van de Moortel gave a chilling description of the orientation of the battlefield facing Mt. Parnassus and Delphi. When visiting my favorite historical sites, I was surrounded by an ancient aura that no textbook or lecture can convey. This aura was especially present when we rowed a replica of an ancient Athenian trireme in Piraeus! Being able to empathize with the past has always been a crucial skill for me and getting to experience the daily life of an Athenian rower was truly enlightening. Also while in Athens, I had the opportunity to visit the Acropolis where I was overwhelmed with both immense appreciation for the Parthenon, as well as the reality of accomplishing this feat, having come from a low-income family. My mother loved waking up to a video call from the Parthenon! UT classics made this dream a reality, even for people like myself who never had the means to do it themselves.

Working at Mitrou during the 2018 study season was not only an amazing life experience, but also a great learning experience for an aspiring archaeologist like myself. I learned how to properly organize an archaeological storeroom, re-bag artifacts, use a database, and edit data entries. My favorite part was being able to touch and hold different artifacts, such as “Psi” and “Phi” figurines, which I had only been able to see in museums and textbooks previously. At Mitrou, I was able to learn about the Ancient Greek world in a hands-on way and I’m very appreciative to have been given this opportunity.

Living and working in Tragana, Greece, for six weeks was quite the cultural shock for someone who had never left the Eastern US for more than a few days. Living with a large group of people with similar interests, surrounded by the most beautiful environment I had ever seen, further encouraged an enthusiasm for discovering all that is possible about the ancient past. I will always look back fondly on those six weeks, both the free time and the work.

I learned a great variety of skills working in our apotheke (lab), from database entry to physically inventorying pottery to attempting to figure out if a bag of particularly tiny shells actually contained any animal bones. Working with numerous experts in fields nearly as far apart as their home countries truly broadened my understanding and respect for the work that goes into archaeology. I don’t plan on working within archaeology, but I am confident that the occupational and personal skills I developed working on the Mitrou Project will benefit me regardless of my career.

My experience in Greece helped strengthen my passion for classics by allowing me to view and experience the ancient world in a completely new way. Being able to see the battlefields of Thermopylae and Chaeronea for myself, serving as a rower on a reconstructed trireme, and seeing a reenactment of a Sophoclean tragedy in the ancient theater of Epidauros gave me a greater understanding of the ancient world, which would have been impossible to gain from merely studying in the classroom. I would like to thank the classics department for their support through the Dr. Susan Martin Excellence Scholarship.

Working on the Mitrou project was a spectacular experience, and I am grateful to have received the Haines-Morris Travel Scholarship. Though it took time to adjust to the new environment, the work always piqued my interest. Maybe I’m a huge nerd, but it was exhilarating to walk into the apotheke (lab) every day and suddenly be surrounded by so much history. Just entering data in Excel was exciting because I was organizing ancient pottery, bones, and shells. Even the vials of ancient dirt fascinated me! I’m happy I got to participate in the project and wouldn’t trade the experience for anything.

My summer in Greece with UT’s study abroad program and at Mitrou was extraordinary. Being in Greece for a little over two months allowed me to feel immersed. For as long as I can remember, Greece has been my dream destination, especially since becoming more involved with classics. I am glad to have explored Greece and its culture, both modern and ancient. Being in the landscapes and working with artifacts made everything feel as if the history and culture I study was resurfacing right before my eyes. I saw many remarkable places and objects throughout Greece, but I am still astounded I saw Sophocles’ Electra in the ancient theater of Epidauros. At Mitrou, I finally had firsthand experiences with artifacts, from architectural fragments to Protogeometric pottery. I worked mostly on artifact photography and warehouse organization, but I also met and assisted archaeology experts. It was fascinating to work behind the scenes of a site because I had never considered all of the work and organization that must happen at each and every archaeological site. In an unexpected turn of events, I even ended up helping the project’s zooarchaeologist, Meagan Dennison, with collecting and processing animal bones for her reference collection throughout the season. Before going to Greece, I had never thought I would be excited to go driving around the countryside looking for animal bones and lithic samples, but now I know. Ultimately, my time in Greece has me wanting to get back in the field to see, learn, and experience more.